LORD HAIDRIC AND HIS HOST

Lord Haidric and his loyal warriors

Some of Lord Haidric's unwashed Fyrd 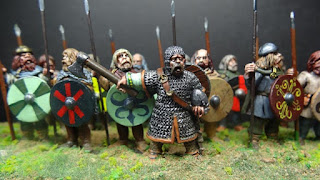 Brother Pestus and his followers

Druic the Soothsayer and his followers 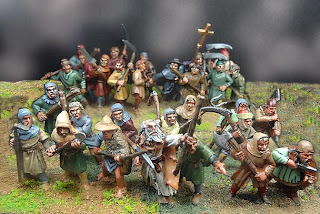 The figures are all 28mm. There are a mix a makes. The warriors and Fyrd are Musketeer miniatures, Lord Haidric is unknown, the peasants are Perry, Foundry and Black Tree. Brother Pestus is Eureka from their Conquistador line, Druic is Garrison.
Posted by Tiger Zouave at 3:03 AM 2 comments:

Here are some of my modern wars 40mm minis. These depict an African militia leader wearing his Panama hat to denote his rank and two French Legionaries. The raw figures are from the HLBS modern range which are sadly no longer available. The Panama comes from a 40mm cowboy mini and I added it the give that figure some style. 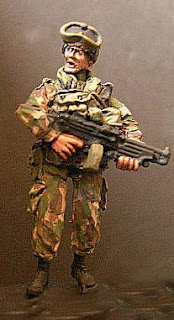 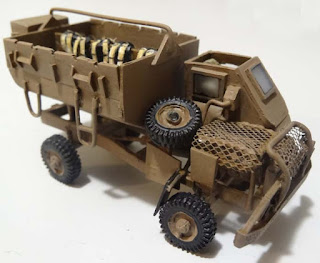 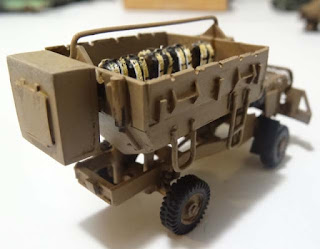 Here a some photos of my scratch built 1/72 scale Buffel MPV APCs. These very distinctive South African APCs saw a lot of service in the wars in Southern Africa during the 1980s. They were also used in Sri Lanka during their civil war. The only commercially available model of a Buffel available in 1/72 scale costs $50 and is a highly detailed resin kit. It is thus for reasons of price and fragility unsuitable for gaming which is what I want my Buffels for. Luckily I found someone who could scratch build these for me and the end result are really little works of art.
Posted by Tiger Zouave at 11:15 AM 3 comments:

Today I ran a practice of the Isandlwana public participation wargame I plan to run at Cancon 13 in January 13. This was a chance to put the mountain I have made onto the table and iron out any last minute glitches in the rules. The games ran well. The game length is two hours. The Zulus win if they eliminate every British soldier which in this case is the infantry and artillery men. British mounted infantry leave the field when this happens. The Brits of course win if they can avoid these conditions. We played two games. The first game literally got down to the very last minute before time was up with the last four British infantrymen holding off masses of Zulus. The game could have gone either way with a decent roll of dice by the Brits allowing them to survive and claim a 'Victory'. Unfortunately for the Brits this did not happen and the Zulus were triumphant which in this case was really a matter of bad luck for the Brits. In the second game the Brits tried something a bit different and stood their ground volleying at the Zulus rather than retreat post haste and attempting to concentrate their forces. This did not work and the game ended with all the British eliminated with half and hour to spare. Both games worked well and everyone had a good time. I still need to work on the table cloths as the basic green they are now is not that pleasing. I also need to paint some more tents for the British camp. I have written the rules to be very simple so that anyone can join in, pick up the mechanics of the rules quickly and play along. Here are some photos of the games: 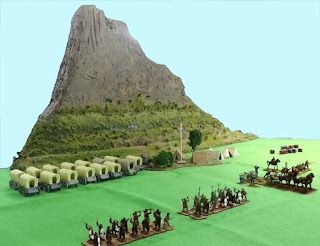 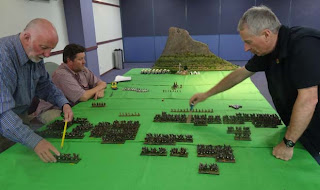 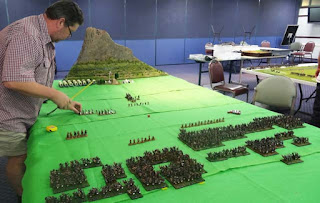 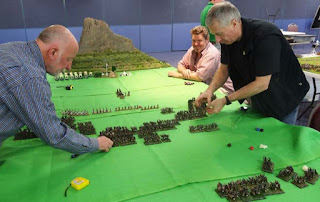 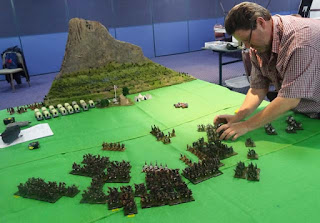 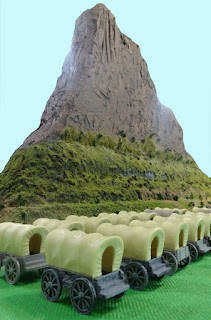 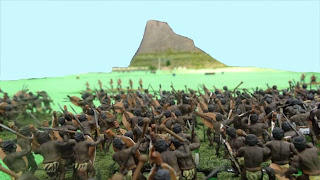 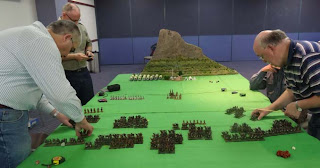 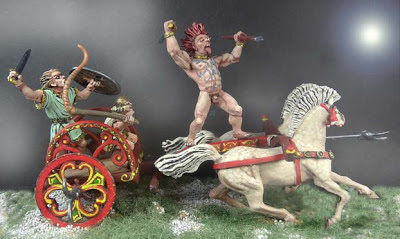 I have had an old 28mm Thunderbolt Mountain set of the Irish War God Cú Chulainn and his war chariot sitting in the box for years and finally gotten around to putting it together and painting it. As you can see Cú Chulainn is not bashful and certainly willing to take the fight to anyone who dares get in his way. This set comes with Cú Chulainn himself, his driver Láeg, his shield bearer and his horses Liath Macha and Dub Sainglend. This is a great set of figures, very nicely detailed even to the left eye of Cú Chulainn popping out of its socket as in the legend. This group of minis will add real spirit to the table and be assured of rolling fist fulls of sixes whenever needed. 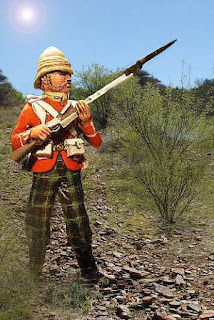 I am slowly building up my 54mm miniatures for wargaming. One of the eras I am concentrating on for 54mm wargaming is the Colonial era. The figure above is a Highland Light Infantry soldier ca.1880. This is a home made figure put together from bits a pieces, a mould made and then home cast. He and his mates will complement the 54mm Highlanders I already have. You can see some of these below. The figures are Armies in Plastic with some minor conversions to a couple of them. 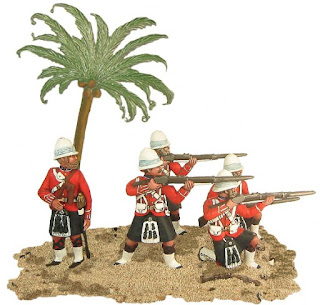 I have a great mob of AIP Mahdists to paint which have sat there for a long time waiting for the paint brush. I have, however, painted some and here they are. 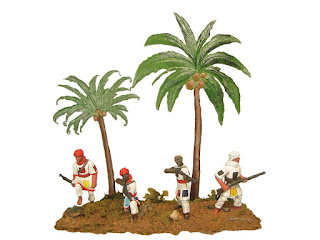 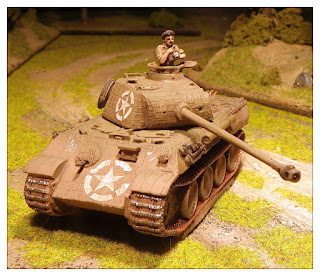 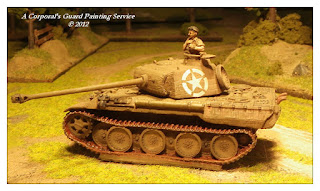 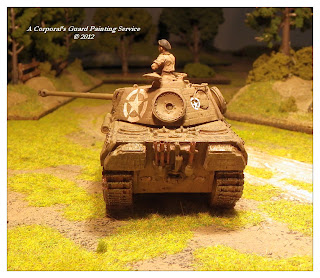 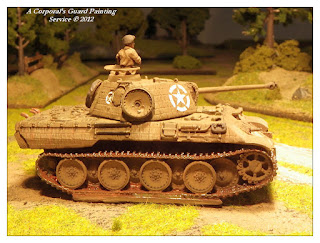 THE GAMERS IN ALL THEIR GLORY 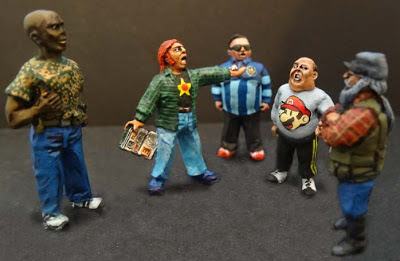 Here are the gamers finished and in all their glory arguing a fine point of the rules - do you recognize any of them?
Posted by Tiger Zouave at 4:19 AM 1 comment:

Artorius and the Vandals

well a good battle is a quick battle..
Played in the Ernesto Guevara room GVS John St annexe, with Impetus Rules The Vandals  had out scouted the Army of Britain , which then set up with horse archers on their left, Artorius  with magic sword, bucellari, equites armigeri and a unit of well night useless cataphracts on the right and a whole mess of close order infantry behind a wooded steep hill that they couldn't enter .The troops who could enter it were inexplicably nowhere near   it.
Quite A Lot Of Germans  were on the other side. of the table . Artorius dashed of with his magic sword and his 5 units of cavalry again 9 units of Germans and Sarmatians and in turn six proceeded to get  himself captured. His army took this rather well  and  retired in good order and the Vandals became   very extremely damn drunk..so it goes 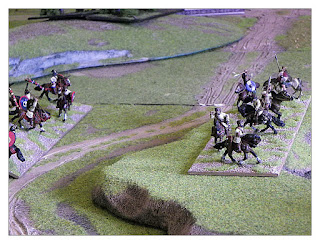 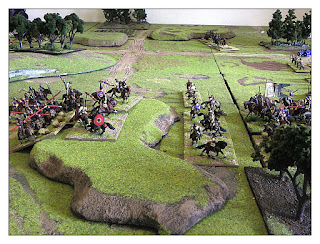 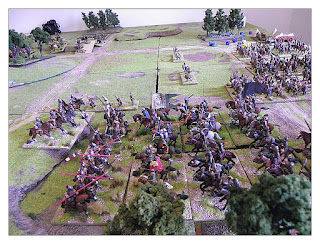 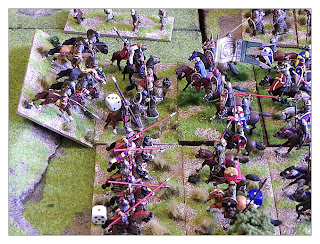 The campaign can be found at
Dux Europa in Goulburn 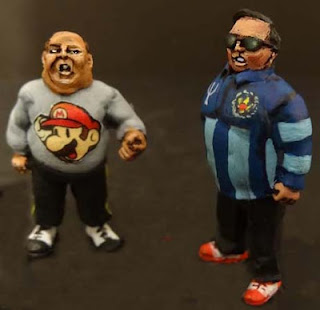 Here are the first two of 'The Gamers' that I have painted. These are Victory Force minis and are nice big 28mm figures. There are five figures in the set and I will post them all once they are painted. The scary thing about these guys is that they look uncannily like gamers I know! 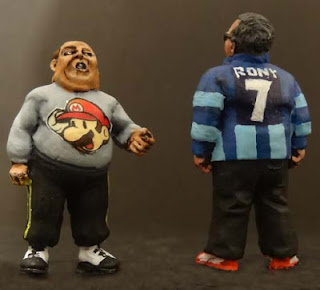 Posted by Tiger Zouave at 12:11 PM No comments: