We played a game of Regimental Fire and Fury last night. The figures were all 25mm/28mm. Two Reb brigades took on two Yankee brigades in a fight for undisputed control of a railway station. The Reb commander Peter, no doubt channelling John Bell Hood threw his best regiments Crack and Veteran straight at the Yankees in a do or die effort to break the enemy. This tactic could only result in glorious victory or disaster. Unfortunately for Peter the latter was the case. In some furious close range combats Peter just could make no headway - not helped by the most consistently appalling dice rolling I have seen for quite some time countered by significantly good dice rolling and tactical deployment from Ian who was commanding the Yankees. In the end the Reb attacking brigade has been pulverised with their commander grievously wounded. What was left of them fell back to a stone wall where the second Reb brigade had taken shelter - this second brigade were a mix of Green and trained troops. The Yankees who because of the very heavy Reb losses by this time significantly outnumbered the Rebs then advanced. With their guns smashed up by Yankee counter battery fire, their left flank in the air and no hope of stemming the blue coated tidal wave moving against them, the remaining Reb commander decided that discretion was the better part of valor and withdrew from the field. As I said a very John Bell Hood battle with a very John Bell Hood outcome. A great game! 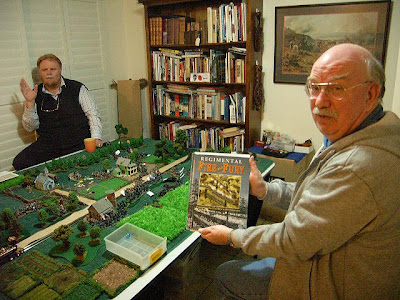 Ian holding the rules and Peter pleading with the dice Gods for some clemency. 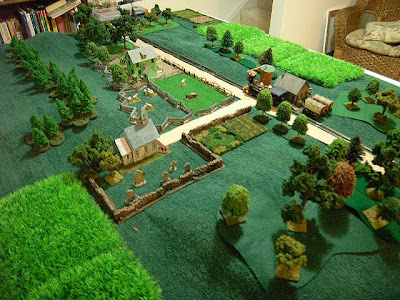 The battlefield - 6 x 5 table. Rebs enter from the left corner closest to you, Yankees from the far right corner. The railway station is right center. 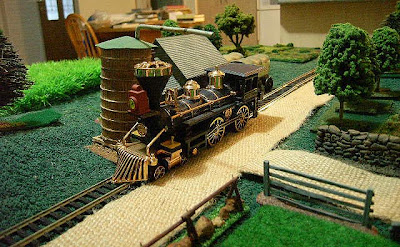 Loco at the Station 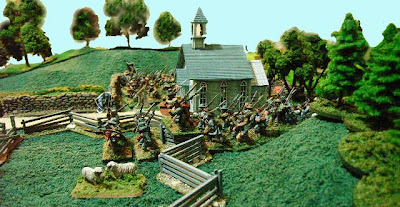 Rebs march onto the field. 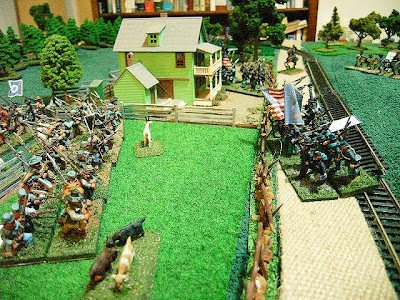 Rebs and Yankees come face to face at the farm house. The Billy goat is wondering who all these noisy newcomers are. 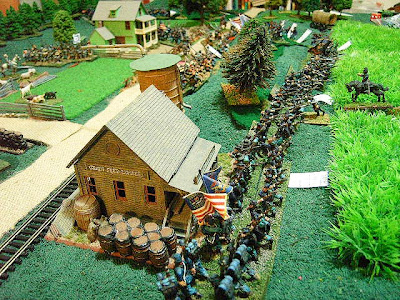 A Yankee brigade takes position behind a ridge and occupy the rail station. 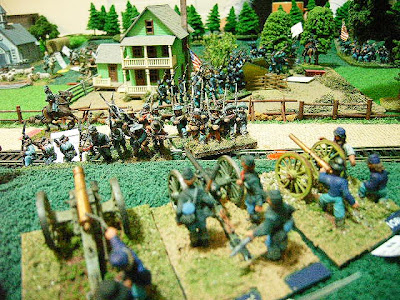 Death or Glory Boys! Rebs attempt to charge into the mouth of the Yankee artillery. 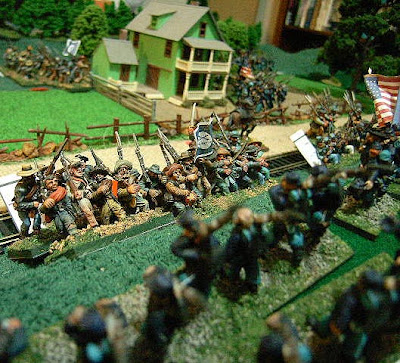 Give the the cold steel boys! Reb infantry about to assault the center of the Yankee line. 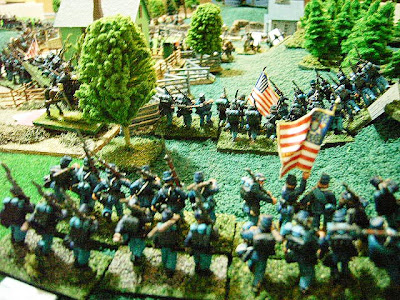 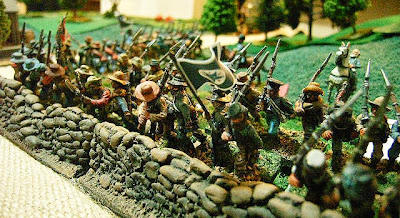 The Rebs take position behind a stone wall to await the Yankee onslaught. 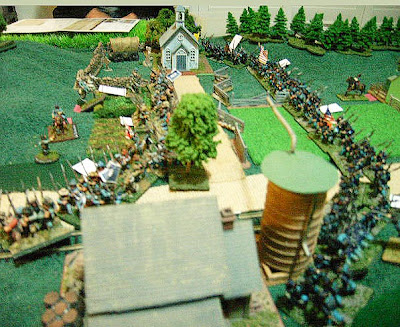 Yankees close in on the Rebs 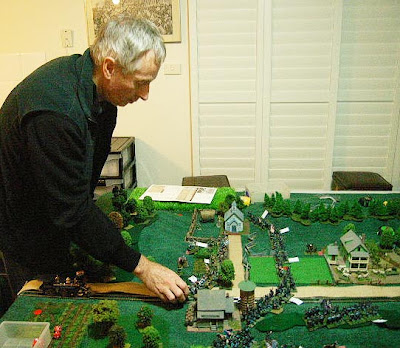 Steve arranging his boys to hold back the Blue tide. 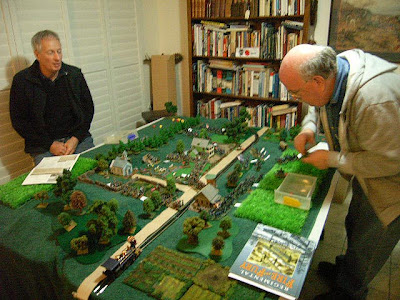 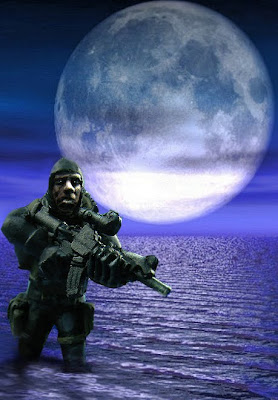 The Start of the 28mm Norman Invasion

Here are beginnings of my Norman Army.  They are mainly composed of Black Tree, Conquest and Crusader figures. Depicted here is the unarmored (or lightly armored) and mounted knights.  I have based the for WRG/FOG/DBX games.   I have always wanted to put together a Dark Ages/Medieval army and Nomans are a good choice as with a few modifications can be early Crusaders or Italo-Normans or good old William's boys themselves!  The sun was working against me in the photos- so unfortunately, they are a bit grainy and there is a lack of detail in the shadows.  I will do a better job when the army is finished! 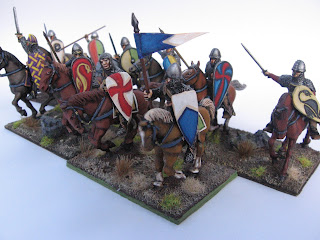 Here are some 40mm Honourable Lead Bolier Suit Company Navy Seals that I put together and painted this week. These are very nice figures that will be getting quite a bit of use in skirmish games sometime soon. 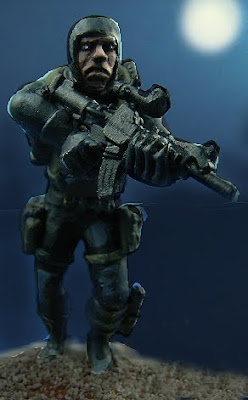 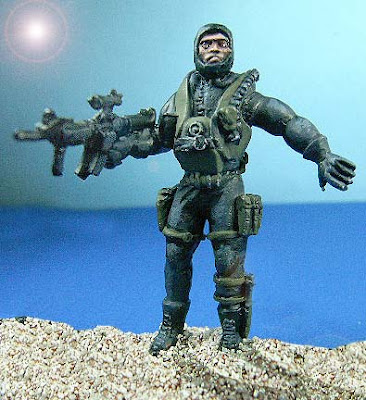 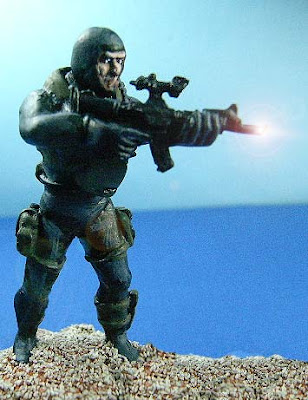 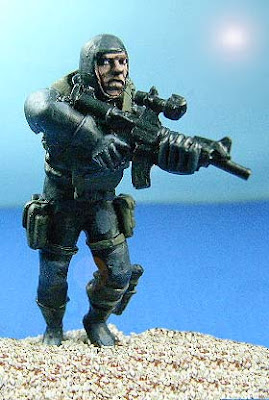 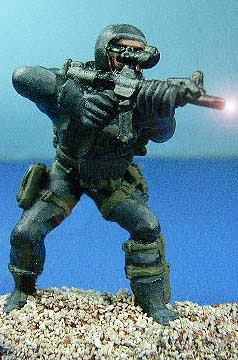 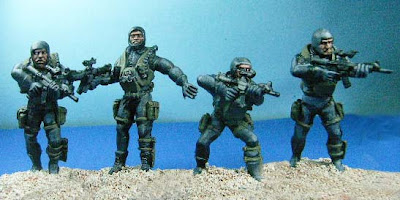 ASSAULT ON THE ALAMO

The Mexican assault on the Alamo - pre dawn 6 March 1836. The figures are all 25mm Cannon Fodder Miniatures, the Alamo is the Hudson and Allen model.
Posted by Tiger Zouave at 1:19 PM 1 comment: 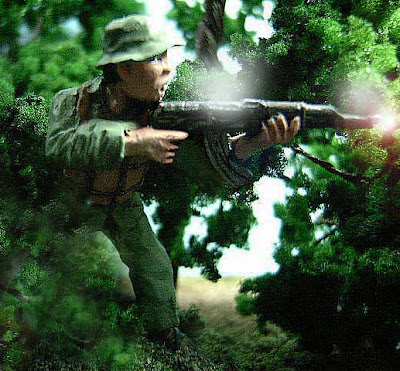 54mm Viet-Cong/NVA mini. I have a few of these that I plan to use for skirmish wargames. I also have some US and Australian infantry in the same scale but have to get them painted.
Posted by Tiger Zouave at 1:31 PM No comments: 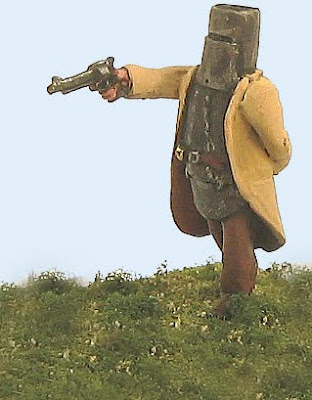 Here is a picture of my 28mm Ned Kelly wearing his iconic armour. The figure is one of the 28mm Australian Bushrangers that I made a couple of years ago. These minis are available from Blazeaway Miniatures http://www.blazeaway.com.au/

Ned is perhaps the best known Australian bushranger. He was born in 1855 into a poor but proud Irish-Australian rural family in North East Victoria and grew up in a clannish close knit environment where strict compliance with the law was not always a priority. This resulted in the police paying uncomfortably close attention to all the dealings of the Kelly family. Ned spent some of his youth associating with Harry Power a notorious bushranger. He spent two periods of his youth in prison, one of six months for assault and one of three years for horse theft - this charge and the harshness of punishment imposed for it is still debated. On his release Ned took up with his Step Father George King from California and rustled horses from Victoria taking them across the Murray River into New South Wales. In 1877 Ned, who was well known to the local police, was arrested for Drunkenness and resisting arrest. Soon after a policeman who had come to the Kelly's house, some say with the intention of imposing himself of Ned's sister Kate, was wounded in the hand by gunshot. The policeman accused Ned of shooting him. Ned, who claimed that he was not even present at the time of the incident, and understandably fearing unsympathetic treatment from the law thought that discretion was the better part of valour and with his brother Dan vanished into the thick forests of North Eastern Victoria. Ned's mother was sentenced to three years prison for being an accomplice in the "attempted murder" of the wounded policeman. This infuriated Ned who, now with a reward on his head was joined by two friends Steve Hart and Joe Byrne, and went deeper into the forests. In October 1878 the Kelly Gang ambushed a party of four police who had been hunting them at Stringbark Creek. In the ensuing shootout three of the police officers were killed and one escaped. This resulted in Ned being Outlawed. The Kelly Gang then went on a bank robbing spree in Victoria and Southern New South Wales and eventually a reward for 8,000 Pounds was posted for them (that is more than $2m in today's money). With the intense police hunt and harassment of all Kelly sympathisers a final clash was inevitable. This occurred at Glenrowan in North Eastern Victoria in June 1880. It was in this fight that the Kelly Gang donned their famous iron suits of armour and shot it out with the police. Three of them, Dan Kelly, Steve Hart and Joe Byrne were killed and Ned, who at dawn walked alone into the police lines firing his revolver, was captured wounded. He was tried, found guilty of murder and hanged on 11 November 1880.
Posted by Tiger Zouave at 1:51 PM 2 comments:

Just finished off twelve of the HLBSC 40mm Modern USMC. That makes a full squad. I also have a Sergeant for them as well. These will be good for skirmish gaming. I have about twenty African militia painted up a few 1/43 scale vehicles as well. 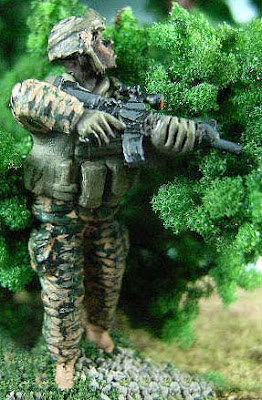 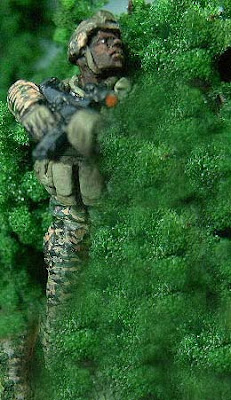 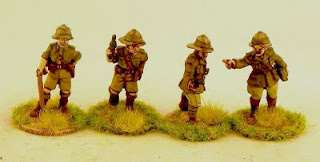 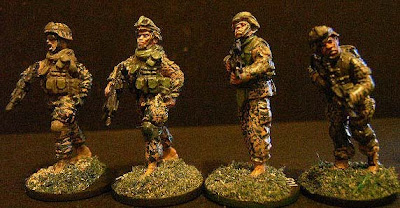 Here are some 40mm modern era USMC minis from the honourable Lead Boiler Suit Company. These minis take a bit of fiddling about with to put together, but once that has been done and they have been painted they are excellent nicely detailed minis.
Posted by Tiger Zouave at 12:50 AM 1 comment: