Giving old figures new life...
After posting my March Attack battle report, I received a few comments and messages about the figures that were in the photos.
They are mostly old Minifigs and Heritage 15s. Perhaps other makes that I don't recognise have found a place in the ranks. It is interesting to think about how many battles these veterans have fought.
This post is to show what goes into getting these pre-owned figures some love and making them table-ready for the modern gaming table. Nothing new or skilled about this - just a process.
Getting the basing looking 'right' is always subjective. In smaller scales the basing is at least as important as the painting. It's a bit "meh" when I see people paint beautiful armies and base them using one type of static grass. It takes something away from the whole effect...just my opinion, of course.
I have been collecting these for a few years but acquired the bulk of the armies from eBay as large lots. It is more cost efficient to buy armies in lots rather than individual units or unpainted bits and pieces. I went for painted armies because the time and effort refreshing existing paint jobs is reduced compared to starting from scratch. Many were painted in the 1980's, some even earlier, so I wanted to include that legacy while making them more suitable for my gaming aesthetic.
I will go through the steps to get 18 small battalions (of 18 figures each) of French infantry completed.
After many hours of organising the various figures into units, removing them from bases and gluing onto new bases, I can now inspect them for painting.

Based on clear acrylic bases and organised into battalions. Sitting on their movement trays made of flexible plastic and matchsticks they seem a long way off being battle ready. A mix of uniforms and painting style make this challenging, but not difficult. Any broken bayonets, long lost, were replaced with little strips of plastic card. 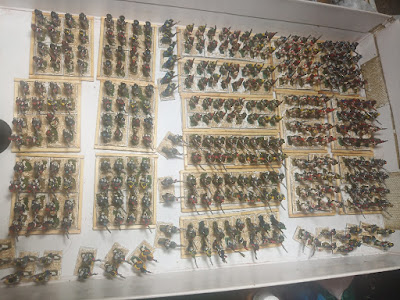 The bases get some modelling paste, then dipped in sand left to dry overnight. 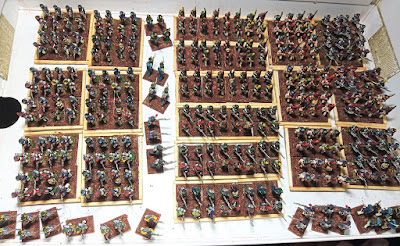 Next the bases get painted a dark brown using craft paints.
Once dry, the base brown gets a very rough dry brush with a tan colour. 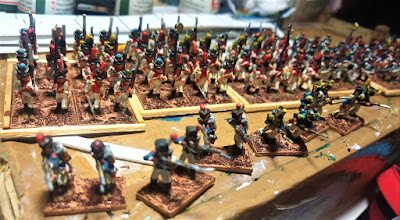 A selection of 6 battalions just before painting begins.
Hmmm... a bit to do. 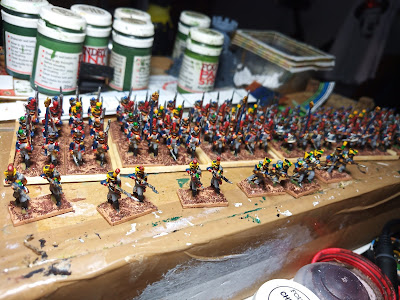 Base colours added or touched up. Washes applied to blend the existing paint and add some depth. Looking a bit better now.

Highlights done and little touches added. These are not super neat, but it gives the effect I want.
First batch done - 12 more units to go... 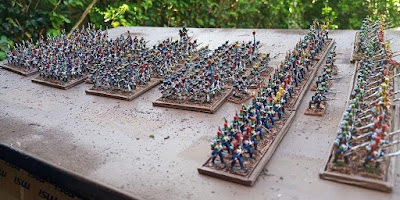 All painted and outside for the first varnish spray.
The movement trays have had modelling paste thinly applied to hide the matchsticks and add strength. Then spray-painted a leather brown colour, only because that was what I had at hand. 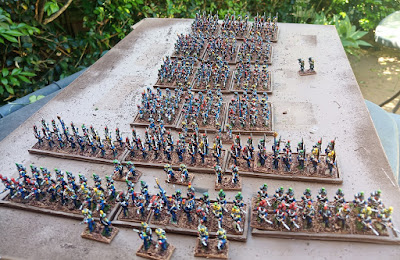 Starting to look decent. Ready for flocking.
I always use three types of flocking to make them look more realistic and so they can blend with different wargame mats. 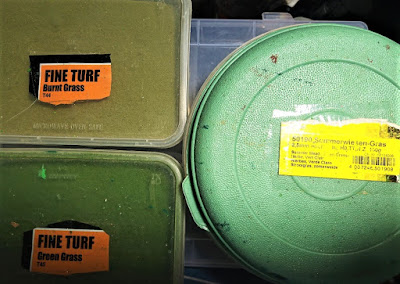 This is what I used. Two types of fine turf by Woodland Scenics and Noch Summer Grass. The latter is to blend in with my wargaming mats.
I recommend using at least one type of flock or static grass that matches your table. 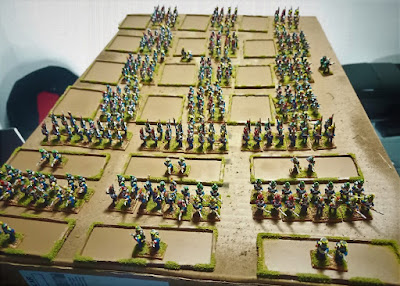 First turf added with PVA glue. Random patches to begin with.
I am doing the movement trays at the same time. 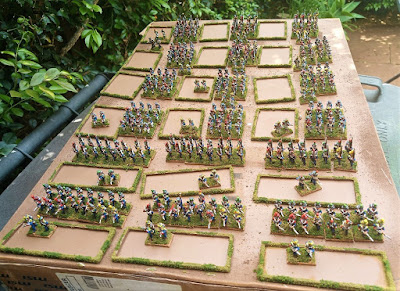 Next, a green-er turf layer. Filling in most of the gaps. Looks OK at this point, but still not quite there. 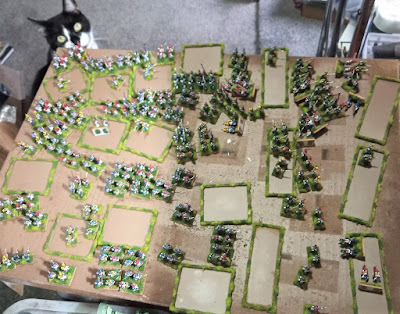 I managed to knock the box everything was sitting on while doing the static grass stage and it got messed up...Fun times.
A furry creature came to inspect the damage, but was no help at all. 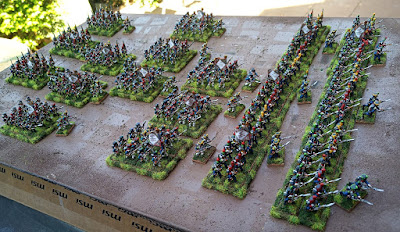 Next morning, everything has dried.
Flags added, unit labels added under the bases. I do this to keep them organised and, frankly, because I am bound to forget what each regiment is supposed to be. 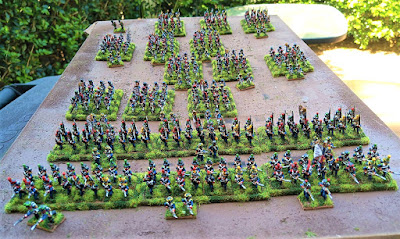 Varnish spray once again to protect the paint, flags and seal in the flocking, at least a little bit.
You may notice almost none of the original brown of the bases is visible. This is because I fully expect the flock to wear off over the years and a bit of brown poking through will still look ok.
324 figures repainted, based and ready to go.
326 really - 2 Prussian Jaeger skirmishers were hanging around and joined the fun.
So that is the process.
It takes time, but the result is a heap of units that I can proudly plonk on the table. Average paint job, average basing, but a pleasing and achievable affect that anyone can do.
Even if you don't like the end result, you may see things that are useful or kick start your own project!
Cheers,
Mick
Posted by Mick at 10:51 PM 3 comments: