Hi All,
The first unit of heavy cavalry for my revamped Ancient Persian army.
I normally don't make cavalry units this large but they just seem to befit this type of army.

They are from Foundry but I think they have been rebadged as Casting Room Miniatures for their eBay site. They are larger than the older, Perry designed range but they still look pretty good and larger is acceptable for heavy cavalry.

Like a lot of heavy cavalry in history, they are presumed to be made up of the 'rich kids' who can afford such things as quality horses and fancy armour so I've tried to paint them to look like they are mix of flashiness and menace.

Spears are plastic from one of those Greek hoplite kits that are easily available. They look good but I snapped 2 just while painting them and another 1 when they had their first game on the weekend. Oh well.. 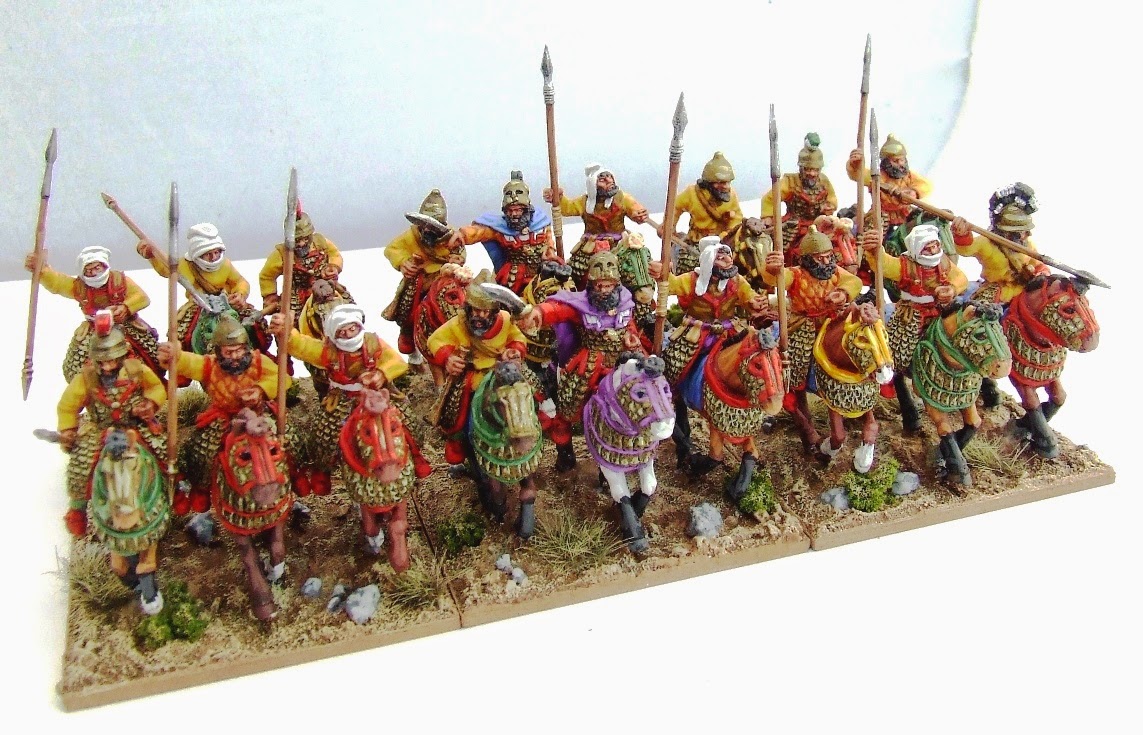 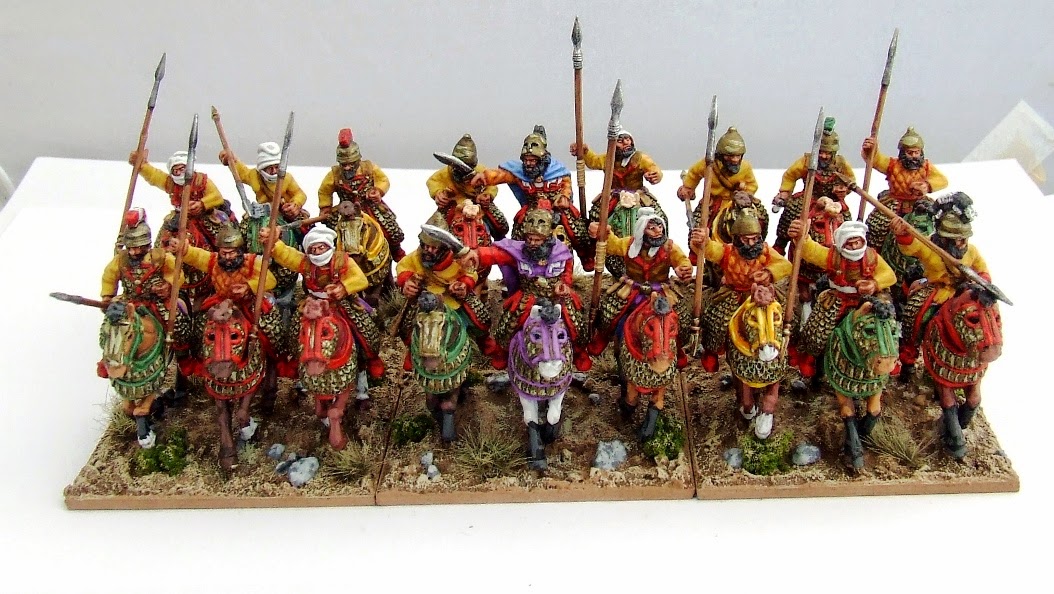 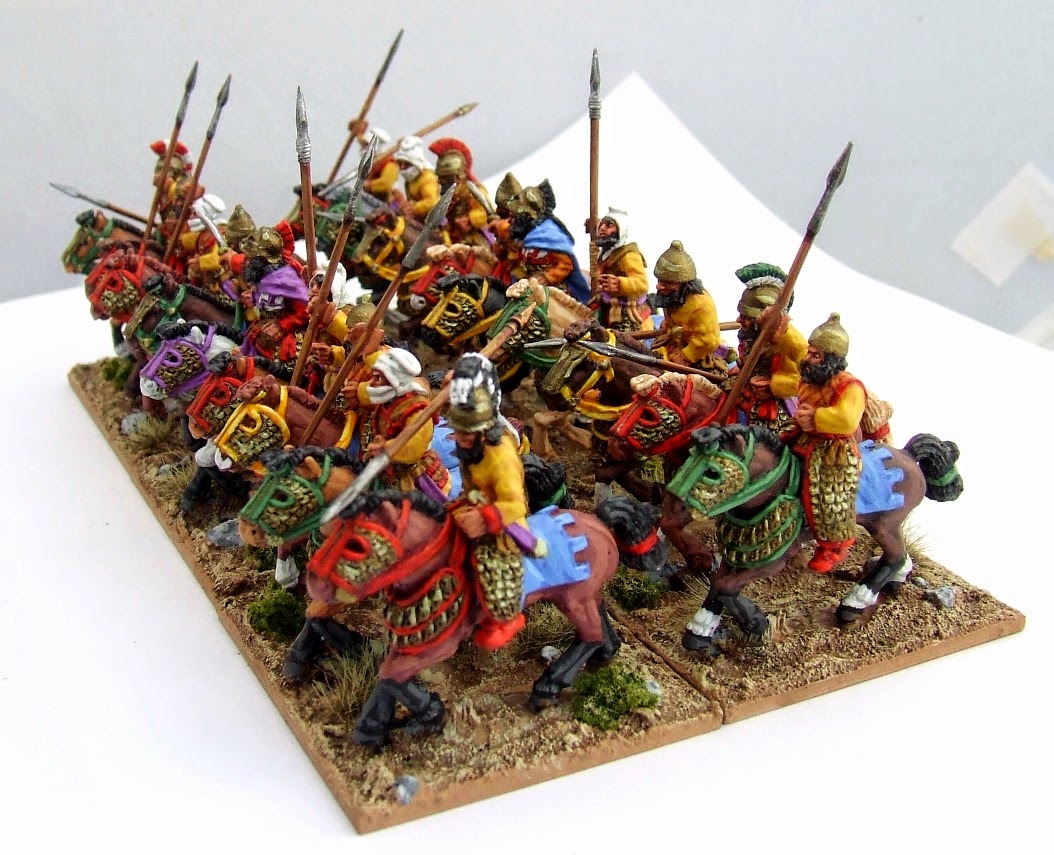 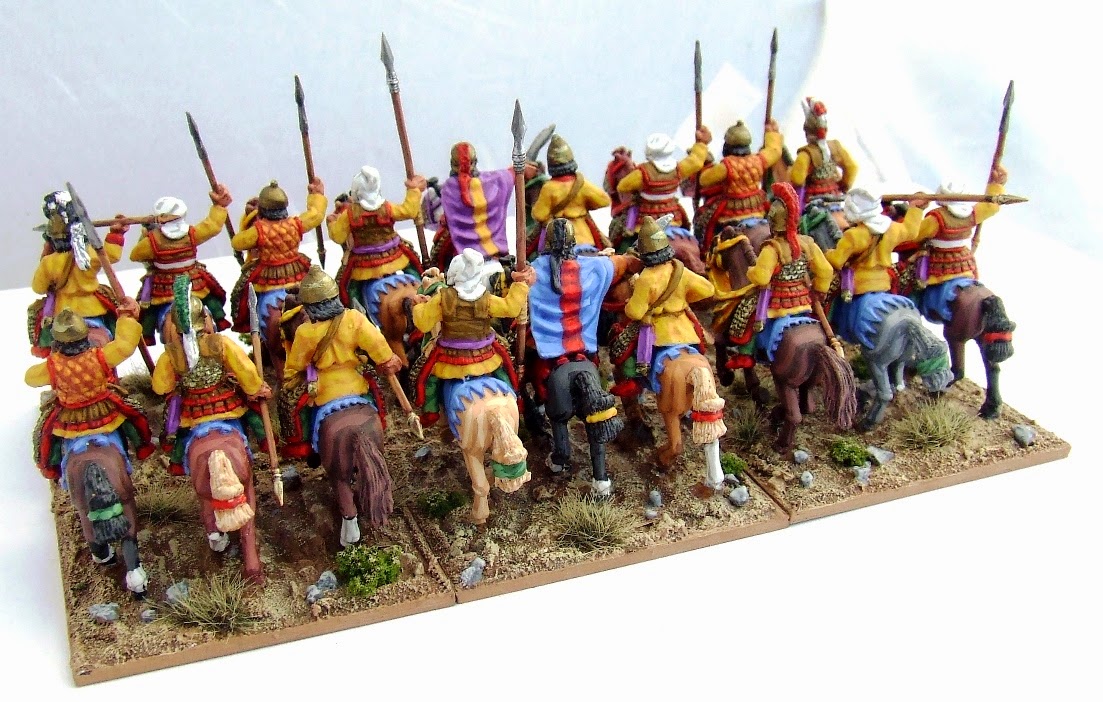 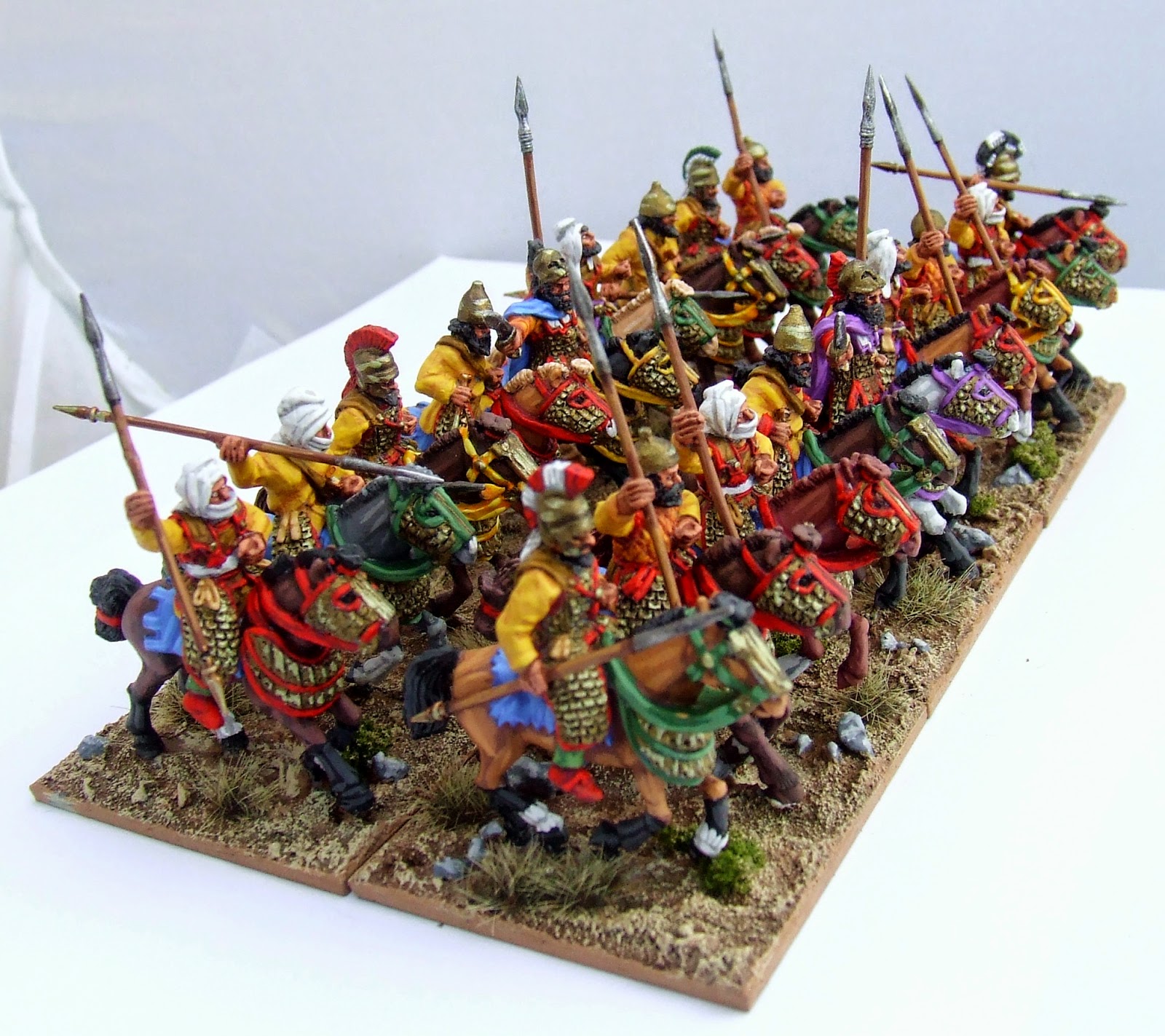 My latest 54mm Gaul warrior
thirsting for the blood of the Roman invader!

Here is the latest 54mm Gaul I have painted. I will add him to my growing collection of Gauls and one day he will take the field to challenge my 54mm Romans. 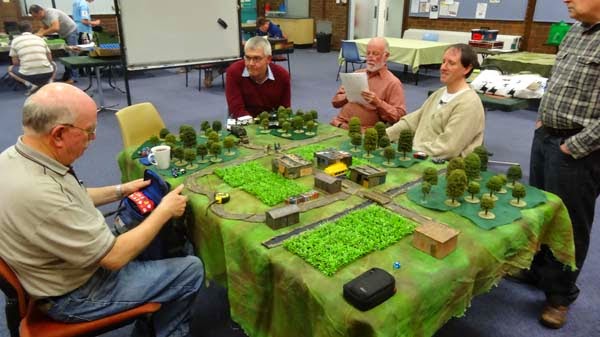 Here are some photos of a game we played last night. The game was set in modern Africa and involved a mission where a squad of French Foreign Legion were tasked with delivering the gravely ill President of a mythical African country and his son to an LZ for evacuation by helicopter. The problem was that the president's enemies, a militia army bent on his destruction, would try to prevent the president's escape. There was a time limit of two hours on the game - the helicopter arrived and left at that time. All the players played the role of Legionnaires. Each had specific abilities which they could use during the game when necessary to do so. There was no set agenda for the game and the payers were free to make whatever decisions and take whatever actions they needed to to complete their mission. Enemy arrivals, strength and locations were dice generated and their actions such as aggressive, slow or passive were also dice generated. The figures used were 40mm, the vehicles 1/43 scale. The rules were our own which are a hybrid of Force on Force and Disposable Heroes. 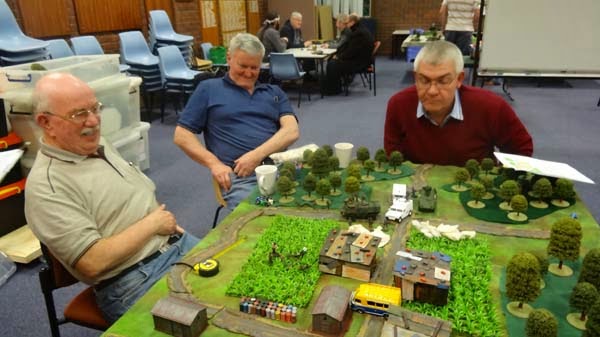 Looking at the the ground they have to cross. Adjutant Chef Leigh (red sweater) considers what to do next. Leigh has already ordered smoke to blanket the village. A civilian bus has been pulled across the road in the middle of the village. 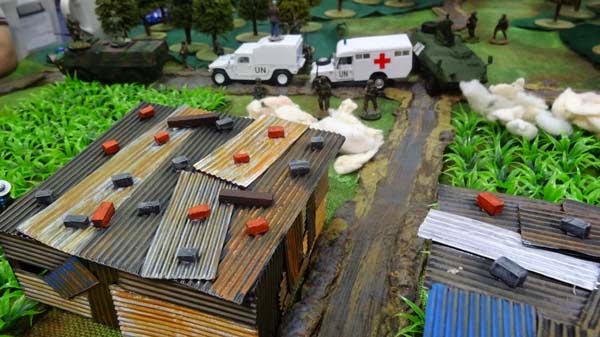 The convoy turns right at the intersection, luckily avoiding by doing so the land mine planted in the road just the other side of the intersection. The Ambulance contains the President. 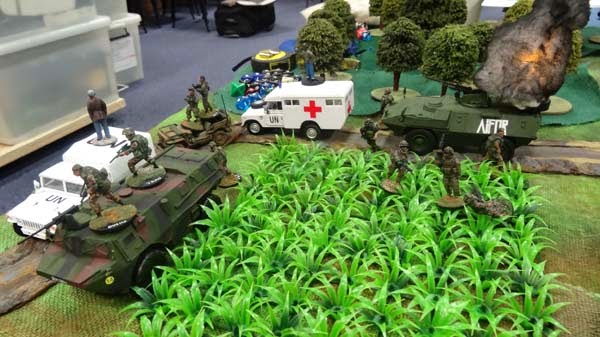 Bang! An RPG hits the AFV at the rear of the column. Luckily everyone on board escape injury. but the vehicle is wrecked. Loyal African troops move through the fields. 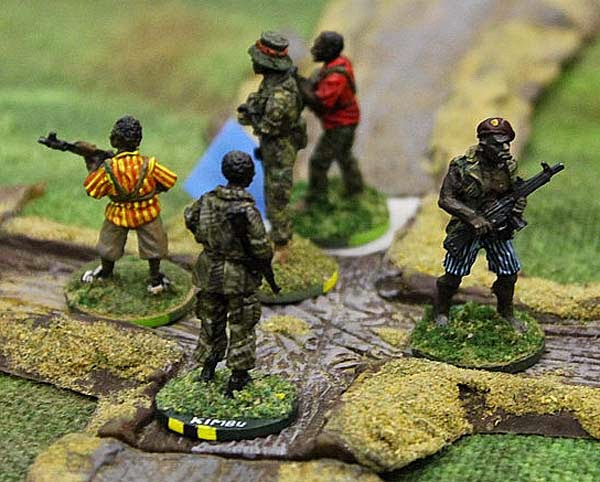 Some of the Militia, determined to prevent the hated president from escaping from the country, and resolved to punish the foreign interlopers who are trying to assist him do so. 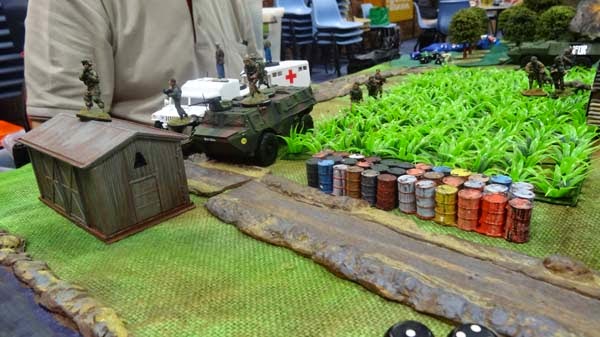 Running down the road and failing to detonate the landmine planted on the road (twice - very lucky) the Legionnaires check out a shed by the river and find three small boats inside. 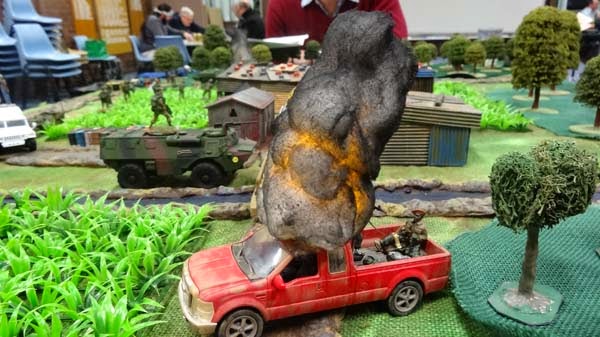 A Technical races onto the table. Its tires are blown out by machinegun fire from the APC but it manages to fire its 12.7mm HMG and brass up two Legionnaires on the bridge, killing one and badly wounding the other. The APC then finishes off the Technical. 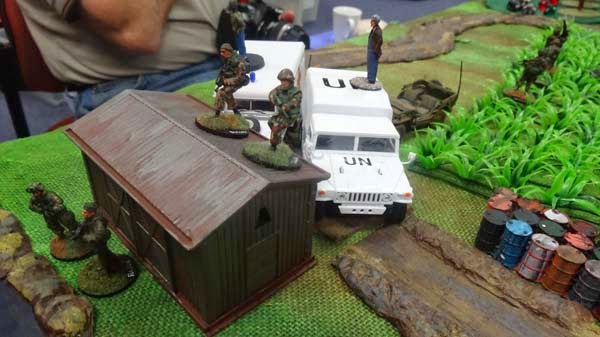 The boats are checked and two of them float. The President is off loaded from the ambulance and prepared for transport in a boat over the river. 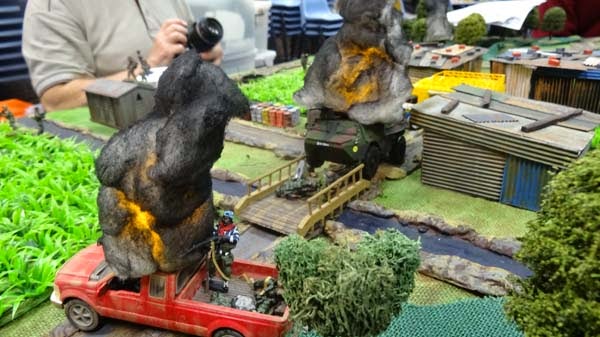 The APC decides to be bold and cross the bridge and runs over a landmine which detonates. The mine wrecks the APC and badly wounds both the Legionnaires inside, one of who is Adjutant Chef Liegh. You can see the bodies of the two Legionnaires, one dead and one badly wounded, who had been hit by the Technical's HMG lying on the bridge in front of the APC. These fellows and the two wounded inside the APC were recovered by their mates and taken across the river to the LZ. 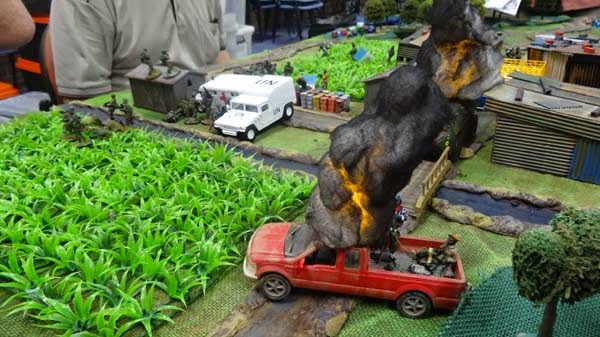 The evacuation of the President continues. Only two men per turn could use each of the boats. In the distance you an see some of the militia in the fields pressing forward. 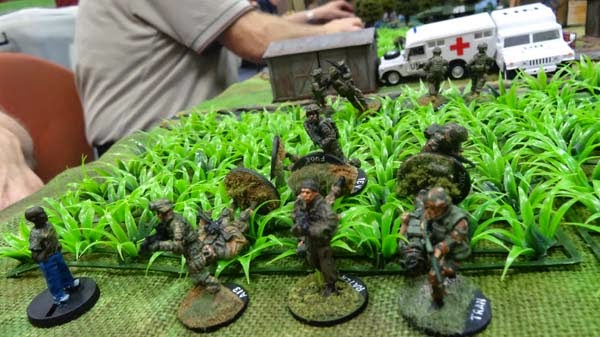 The President's son watches as the last of the Legionnaires and Loyal African troops carrying their dead and wounded make it to the LZ in time for extraction. 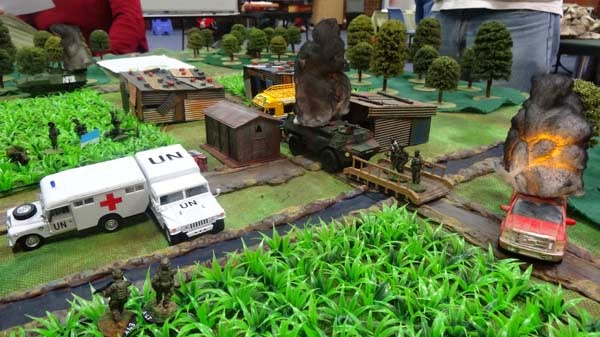 Militia in the fields and on the bridge, burning and abandoned vehicles mark the end of the fighting. 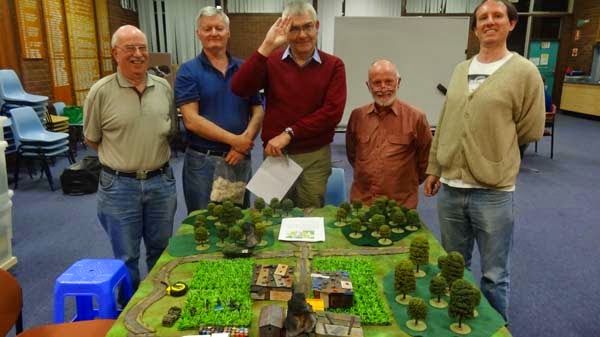 Here are my latest Hussites. This is Jan Zizka and his standard bearers as well as some hand-gunners. The minis are all Kingmaker Miniatures from 1st Corps. 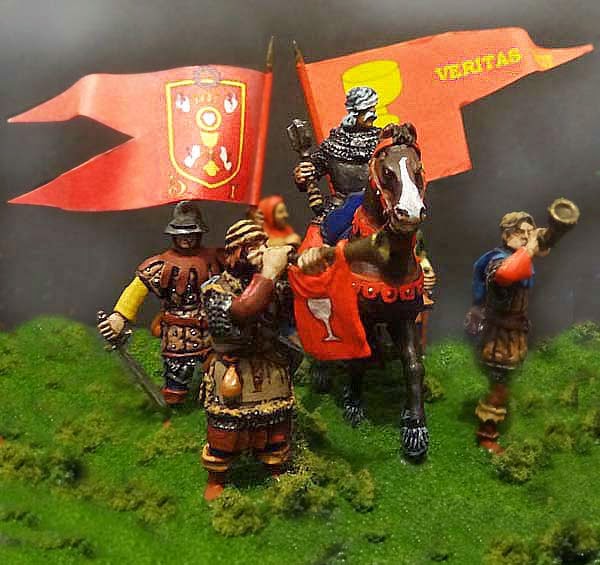