I haven't had much of a chance to play many games this year, but I thought this was interesting enough to post on this blog.
This was an introductory game of the Blaze Away WWII rules I ran on Sunday with two players . Both players hadn’t played much WWII and neither has played simultaneous movement games before.
Even though I was a bit rusty on the rules, and had a few new rules to remember, the guys picked it up well by the 4th turn and it was easy enough to run just using the unit sheets and reference charts.
The game unfolded as described below. 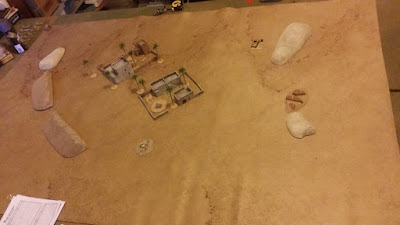 Table set up for the game. A simple scenario designed to get tanks, recon, infantry, heavy wpns and ATGs involved.
Based around two small villages and depriving the use of the wells to the enemy. Classic early DAK vs British encounter with both sides roughly equal using my test-version point calculator. The British having a slight points advantage 457 to 452. 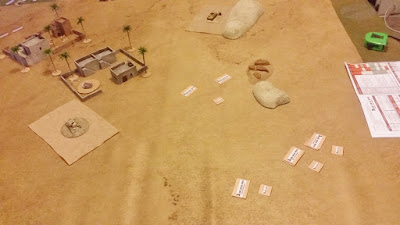 First moves using the hidden movement cards. A couple of patches of soft sand are spotted by the recon units as they advance. I made some fancy, laminated movement and order cards with a logo...just because it's a nice detail. You can see the reference sheet on the right of the picture. 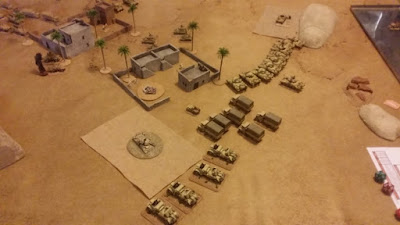 British and DAK recon units swing between the villages and the Vickers tank gets off a lucky shot on the SDKFZ 221.
The British advance is revealed. That’s a lot of Crusaders (and rather too packed together for my liking), but most are only armed with 2pdrs. The unit of 4 2pdr portees covers a flank. 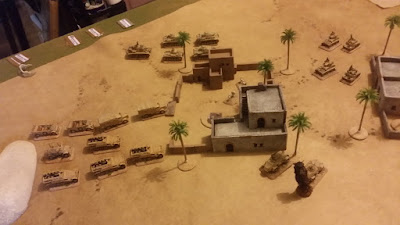 The DAK advance. Not as many, but these are elite troops. Both sides chose the same flank to put their tanks. This was good as a learning experience, but limited the tactical possibilities. Hopefully both players learned some lessons. 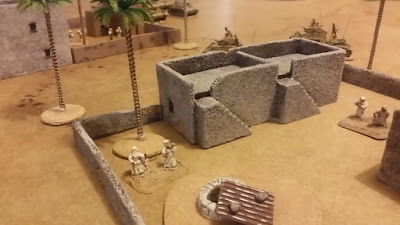 Some of the locals wandering around, seeing what all the fuss is about. 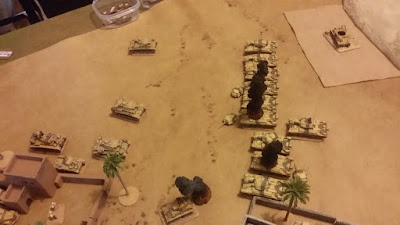 PzIIIs might as well be Tigers. Rolling really hot dice and carving up the crusaders at close and medium range. The initial carnage surprised the players to begin with, but they quickly understood the rationale and adjusted their tactics. The decision making with the order cards was starting to click. 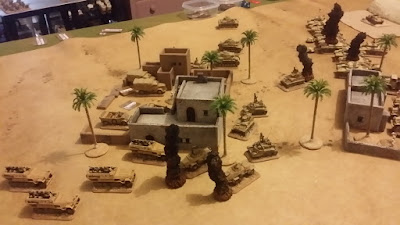 The 2 pdr portees took care of the remaining DAK recon SDKFZ 222 as the panzergrenadiers in halftracks approached. 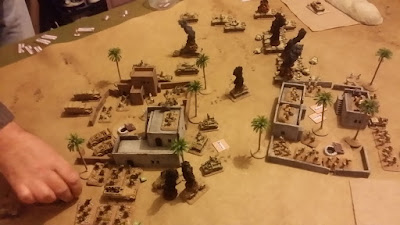 DAK 50mm ATGs and medium mortars deploy in the village. The PzIIIs with excellent crews and being stationary, got the double shot bonus and caused another round of carnage to the Crusaders. The Crusaders still got off enough shots to take out 2 PzIIIs and the PzII CHQ tank. This caused a drop in command rating (to Confident) and ended the double shot advantage. The 50mm ATGs were suddenly in a terrible position - they had no more targets. This bad luck tipped the game.
The Vickers and Bren carriers raked the pzgrenadiers as they dismounted. The British infantry took up strong positions in the village. 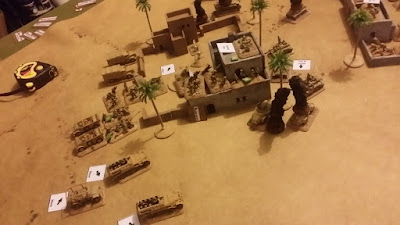 The ATGs mounted up and tried to move to a better position and the pzgrenadiers did the same. The few remaining Crusaders knocked out the last PzIII by swinging to a flank shot. The DAK mortar platoon got blown away by the British HMG platoon positioned cleverly in their village. 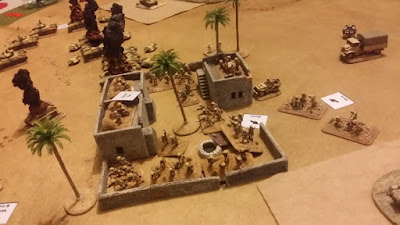 The same turn with the unscathed British infantry and the mortar platoon unable to get into action on time. A dud-day for mortars. 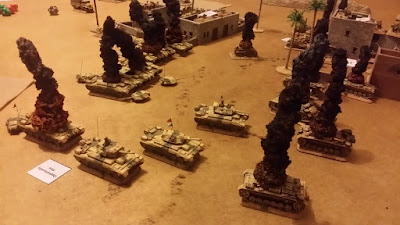 The remaining Crusader sqdn surges through the wreckage and turns the tide of the game. If they had fallen under the sights of the 50mm ATGs, it would have had a different ending. But, that’s how things can go. Using the D20 for armour combat adds more drama than using 2D10. The law of averages will usually work with 2D10. But with D20 you can score the miracle ‘20’ when you need a Hail Mary, or, have everything in your favour and feeling confident, then roll a 3… 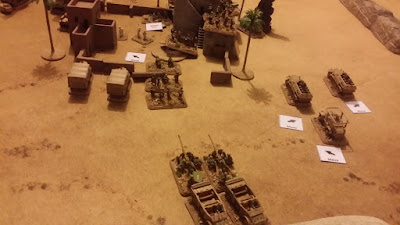 After contaminating the wells with copies of Mein Kampf, the DAK commander decides to withdraw to minimise losses. The ATGs leading the skedaddle to safety.
A tactical victory to the British commander, although the points value of losses was fairly equal.

A fun game and all over in about 10 turns. It was deliberately uncomplicated to give them an idea of how it works while they got to blow stuff up on a Sunday afternoon.

Drop a message if you're interested in a copy of the rules. No pretensions of being anything fancy or different. They just fit my particular biases and idea of a fun WWII game. 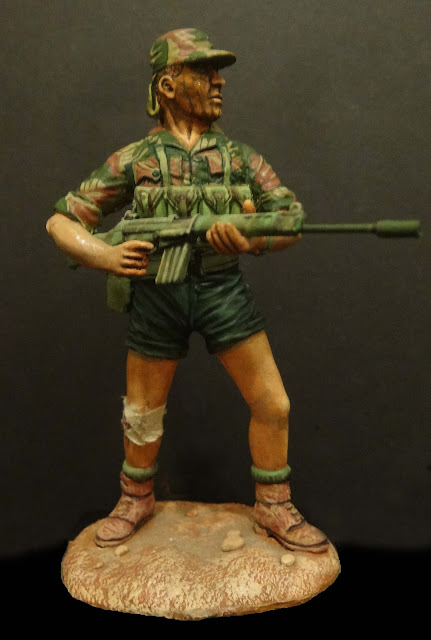 Here is a 120mm miniature of a Rhodesian soldier I have painted. Its a very nice miniature and was a pleasure to paint.
Posted by Tiger Zouave at 5:00 AM 4 comments: 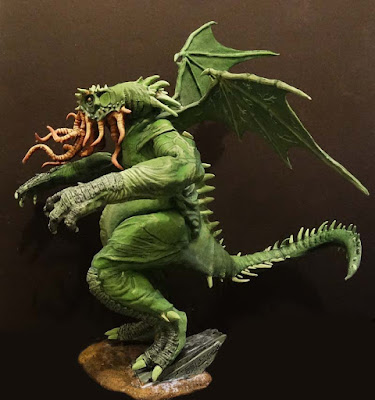 I purchased the Reaper Miniatures Cthulhu model a while back. I got it because it is an excellent and big model and I thought it would be a challenge to paint. I have painted it now and it has lived up to expectations. It is a superb model and if you take the time to paint it well rewards the effort. When finished the model stands about 250-275mm high. Here is my painted Cthulhu.
Posted by Tiger Zouave at 10:48 PM No comments: