Here are some photos from today's Hail Caesar game. This game is the last game in a campaign that has brought the Roman army to the walls of the Dacian capital. We, the Roman good guys, had the job of storming the Dacian capital while defeating a Dacian army determined to prevent us doing so. The game began with our sturdy Legionaries rushing at full speed across the table and establishing themselves very quickly at the base of the walls of the Dacian city. While some Romans attempted to escalade the walls using ladders others proceeded to bash away at the walls with their rams and tools. As this was happening the anticipated Dacian army surged onto the table from two sides with their main strength being on their left - the Roman right. The first to make contact were the Sarmatian cataphracts who were only brought to a halt after a protracted and bloody fight. The vast horde of Dacian infantry charged into the Roman ranks but failed to make much impact and were cut to pieces. Meanwhile the Romans who had managed to scale their ladders and cross the walls of the city were destroyed by the Dacians waiting inside. The battering rams continued their work as Roman artillery kept the walls clear of Dacian defenders. The Dacians who came on from the right flank -the Roman left- made a bold showing but were contained by light cavalry a single unit of Praetorian infantry and a brave charge by allied barbarian infantry. After turns of pounding away the walls finally gave way and the Romans surged into the city. The first Legionaries who did so were cut to pieces by the falx wielding Dacians who were waiting for them, but fresh Roman units followed up and cut the Dacians to pieces. With this Dacian morale collapsed and the Legionaries set about enthusiastically indulging themselves in Imperial redecorating and souvenir gathering. Here are some photos of the game: 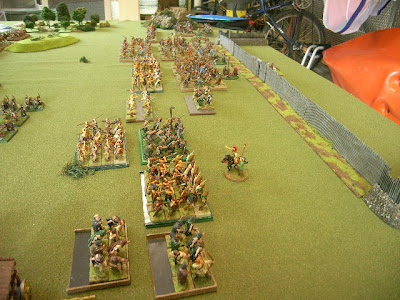 The table with the Roman army fast approaching the Dacian city walls on the right. 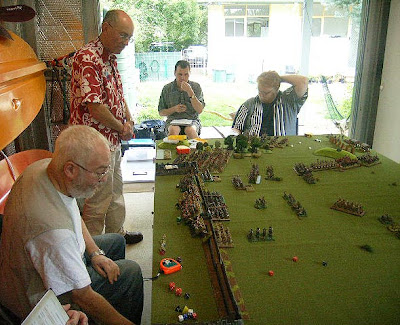 The game in progress. The Romans have surged ahead and are at the base of the city's walls. In the distance the Dacian army rushes on to the table. 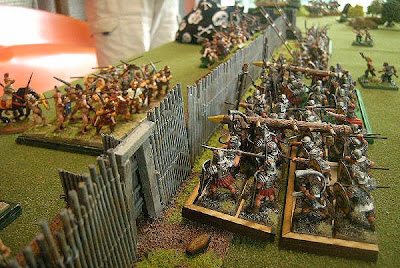 Battering rams go to work. Dacians inside prepare themselves for the coming storm. 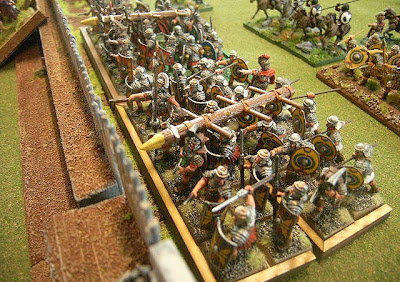 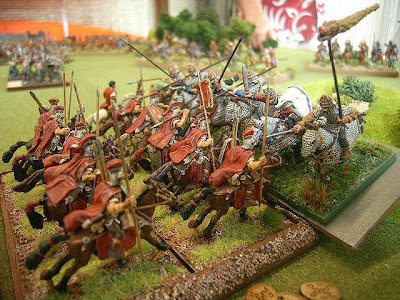 A fierce fight between Roman and Samartian cavalry eventually saw the Romans victorious. 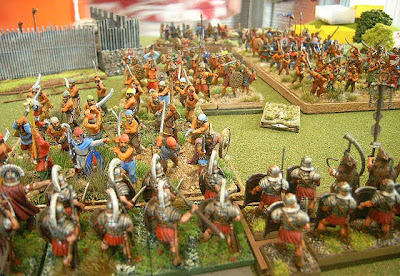 The Dacian horde surges forward to engage the Romans. Throughout the game Roman artillery inflicted casualties on the defenders of the city walls, forcing them to eventually abandon the walls. 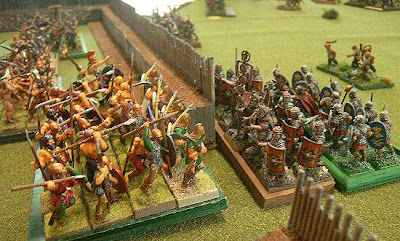 The walls are breached. The first Romans through were destroyed. 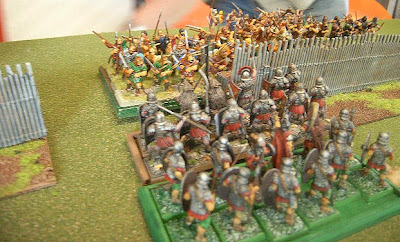 Fresh Roman troops followed immediately and they wiped out the Dacian defenders. With that the game ended.